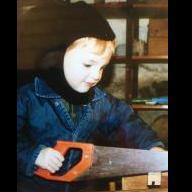 Phantom of the stallion station

By Mulesaw, December 20, 2021 in Saddle and Tack Accessory Items